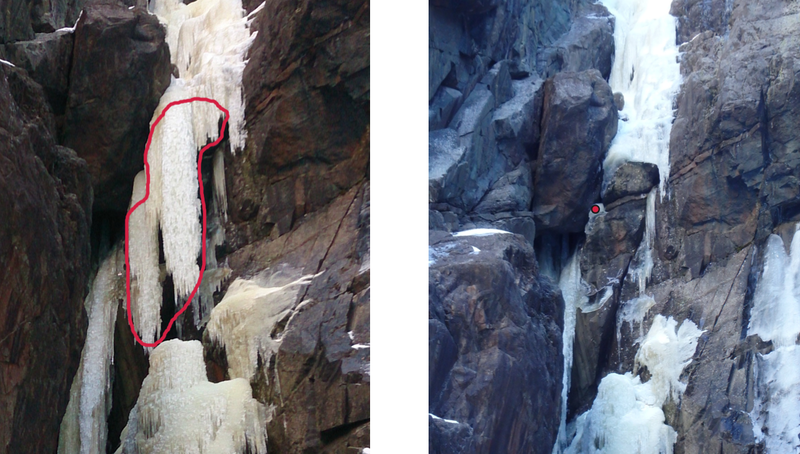 Her er rappoerten mer detaljert på Engelsk:
On February 22, 2015, a 33-year old Italian climber lost his life in an accident while ice climbing at Rjukan.
Sunday morning, two male Italian climbers started to climb the route Lipton, graded WI7. They were part of a group of four Italian climbers visiting Rjukan. The route is located in the innermost part of the Upper Gorge; approximately 50 meters left of Rjukanfossen. One can easily see Lipton from the road (Rv 37). In the “Heavy water” guidebook, the description of the climb reads:
“4 pitches. At the very end of the gorge, inside a huge groove, you will find this world classic. Start inside the groove (sometimes mixed) and climb as high as you can on thin ice to a belay under a roof. Traverse out right and gain the pillar (bring a Friend 2 for protection in the roof) and do some acrobatic moves to get established on the ice. Continue to the next roof for a belay. Continue through this roof to the top. Lipton should be considered as a serious climb and aspiring climbers should consider conditions carefully. The first pillar usually falls down at least twice each winter.”
The team decided to start early in order to take advantage of lower temperatures in the morning. The temperature was then about -4 degrees Celsius. The two climbers had known each other for about four years, and climbed several times together during this time. The assumed stronger climber of the two, which was also training to become a mountain guide, was to lead the first pitch. They used half ropes and the climber used standard procedure, placing ice screws and clipping the ropes along the way. The accident happened while the climber was on the first pitch. After 30 vertical meters, the climber starts the crux traverse. The climber had traversed about 10 meters, and had obviously tackled the most challenging part when the accident happened.
The accident was triggered by massive amounts of ice (see photos on next page) that came loose and somehow pulled the climber along. It is not known whether an ice screw was attached to the falling ice, or whether the ice screw came loose as the ice collapsed. It is assumed that the last piece of protection placed, was an ice screw in the large hanging icicle on the traverse. The belayer reports that the climber was hit by falling ice, and since his protection for the traverse was now gone, he also experienced a large pendulum, and probably hit the rock face as well when the rope swung. The exact details of what happened during the fall is not known. The fall was arrested by an ice screw that held (see photo). When the rope came to rest, the climber had sustained massive injuries during the fall. He fell approximately 10 meters, and hung in free air after the fall. The belayer was sheltered and was not hit by the falling ice. Thus, it was possible to lower the climber directly to the ground.
The belayer moved the climber a short distance away, being afraid that more ice might fall down.

At the same time as the accident happened, four other climbers were scouting the conditions in the gorge from the road. They heard a loud crash of ice, and saw that the large hanging icicle of the first pitch of Lipton had collapsed. They also heard shouting from the area immediately after, and saw the fallen climber hanging in the rope. They notified the police, which arrived along with an ambulance crew shortly after. Three of these climbers were given a radio and some first aid equipment before they descended into the gorge. Two of them downclimbed and arrived at the scene approximately 30 minutes after the accident. The third climber rappelled down and arrived a few minutes later. Another Italian climber had also arrived at the scene shortly before that. The climber was at this time still conscious and constantly complaining about pain in his head, back, one arm and one leg.
A rescue crew started to arrive at the scene approximately an hour after the accident. Shortly after, the climber lost consciousness, and was given CPR. A Sea King helicopter was also commissioned, but was unable to help due to the difficult and narrow conditions in the gorge. Due to the massive injuries sustained, first aid was futile. Even if the climber had gotten professional care immediately after the accident, the likelihood for survival was slim to none. A doctor arriving at the scene approximately 20 minutes after CPR was started, declared the climber dead.
This accident was undoubtedly initiated by the large chunk of ice that fell down. It is interesting to look at the temperature history of Rjukan the previous week in order to understand how this could happen.
Gravity pulls. Both man and ice are subject to the laws of gravity. Man hangs on to the ice due to his sharp tools. Ice hangs on to the rock since it is frozen solid into the rock. Chemical bindings at the molecular level opposes the pull of gravity and prevents the ice from falling down. The week before the accident, there were huge variations in the temperature at Rjukan. For three days, the temperature was 6-7 degrees Celsius during daytime. The temperature then dropped again during the weekend. Most of the ice will then remain at a relatively high temperature, making it soft and easy to climb, while the stability of the ice may be compromised.
Warm temperatures of around 6-7 degrees for the three days prior to the weekend will have induced weakness in the hanging ice that was under high levels of tension due to having no base of support One cannot say for certain that the ice fell down because it was climbed upon. Sometimes the ice comes down by itself as well due to the pull of gravity.
The accident serves as a sad reminder that ice can be unstable, and that we always need to evaluate the conditions carefully before starting a climb.